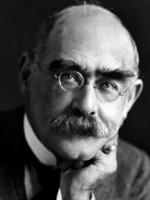 Rudyard Kipling was an English writer and winner of the Nobel Prize for Literature. He is best known for his poems and stories set in India during the period of British imperial rule.

Rudyard Kipling was born in Bombay, India, on 30 December 1865. His father was an artist and teacher. In 1870, Kipling was taken back to England to stay with a foster family in Southsea and then to go to boarding school in Devon. In 1882, he returned to India and worked as a journalist, writing poetry and fiction in his spare time. Books such as 'Plain Tales from the Hills' (1888) gained success in England, and in 1889 Kipling went to live in London.

In 1892, Rudyard Kipling married Caroline Balestier, the sister of an American friend, and the couple moved to Vermont in the United States, where her family lived. Their two daughters were born there and Kipling wrote 'The Jungle Book' (1894). In 1896, a quarrel with his wife's family prompted Kipling to move back to England and he settled with his own family in Sussex. His son John was born in 1897.

By now Rudyard Kipling had become an immensely popular writer and poet for children and adults. His books included 'Stalky and Co.' (1899), 'Kim' (1901) and 'Puck of Pook's Hill' (1906). The 'Just So Stories' (1902) were originally written for his daughter Josephine, who died of pneumonia aged six.

Rudyard Kipling turned down many honours in his lifetime, including a knighthood and the poet laureateship, but in 1907, he accepted the Nobel Prize for Literature, the first English author to be so honoured.

In 1902, Rudyard Kipling bought a 17th century house called Bateman's in East Sussex where he lived for the rest of his life. He also travelled extensively, including repeated trips to South Africa in the winter months.

In 1915, his son, John, went missing in action while serving with the Irish Guards in the Battle of Loos during World War One. Rudyard Kipling had great difficulty accepting his son's death - having played a major role in getting the chronically short-sighted John accepted for military service - and subsequently wrote an account of his regiment, 'The Irish Guards in the Great War'. He also joined the Imperial War Graves Commission and selected the biblical phrase inscribed on many British war memorials: 'Their Name Liveth For Evermore'.

Rudyard Kipling died on 18 January 1936 and is buried at Westminster Abbey.