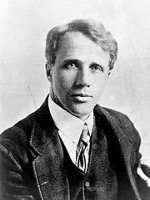 Robert Lee Frost (March 26, 1874 – January 29, 1963) was an American poet. His work was initially published in England before it was published in America. Known for his realistic depictions of rural life and his command of American colloquial speech, Frost frequently wrote about settings from rural life in New England in the early twentieth century, using them to examine complex social and philosophical themes.

Frost was honored frequently during his lifetime and is the only poet to receive four Pulitzer Prizes for Poetry. He became one of America's rare "public literary figures, almost an artistic institution." He was awarded the Congressional Gold Medal in 1960 for his poetic works. On July 22, 1961, Frost was named poet laureate of Vermont.

Robert Frost was born in San Francisco, California, to journalist William Prescott Frost, Jr., and Isabelle Moodie. His mother was a Scottish immigrant, and his father descended from Nicholas Frost of Tiverton, Devon, England, who had sailed to New Hampshire in 1634 on the Wolfrana.

Frost's father was a teacher and later an editor of the San Francisco Evening Bulletin (which later merged with The San Francisco Examiner), and an unsuccessful candidate for city tax collector. After his death on May 5, 1885, the family moved across the country to Lawrence, Massachusetts, under the patronage of (Robert's grandfather) William Frost, Sr., who was an overseer at a New England mill. Frost graduated from Lawrence High School in 1892. Frost's mother joined the Swedenborgian church and had him baptized in it, but he left it as an adult.

Although known for his later association with rural life, Frost grew up in the city, and he published his first poem in his high school's magazine. He attended Dartmouth College for two months, long enough to be accepted into the Theta Delta Chi fraternity. Frost returned home to teach and to work at various jobs, including helping his mother teach her class of unruly boys, delivering newspapers, and working in a factory maintaining carbon arc lamps. He did not enjoy these jobs, feeling his true calling was poetry.

In 1894, he sold his first poem, "My Butterfly. An Elegy" (published in the November 8, 1894, edition of the New York Independent) for $15 ($434 today). Proud of his accomplishment, he proposed marriage to Elinor Miriam White, but she demurred, wanting to finish college (at St. Lawrence University) before they married. Frost then went on an excursion to the Great Dismal Swamp in Virginia and asked Elinor again upon his return. Having graduated, she agreed, and they were married at Lawrence, Massachusetts on December 19, 1895.

Frost attended Harvard University from 1897 to 1899, but he left voluntarily due to illness. Shortly before his death, Frost's grandfather purchased a farm for Robert and Elinor in Derry, New Hampshire; Frost worked the farm for nine years while writing early in the mornings and producing many of the poems that would later become famous. Ultimately his farming proved unsuccessful and he returned to the field of education as an English teacher at New Hampshire's Pinkerton Academy from 1906 to 1911, then at the New Hampshire Normal School (now Plymouth State University) in Plymouth, New Hampshire.

In 1912, Frost sailed with his family to Great Britain, settling first in Beaconsfield, a small town outside London. His first book of poetry, A Boy's Will, was published the next year. In England he made some important acquaintances, including Edward Thomas (a member of the group known as the Dymock poets and Frost's inspiration for "The Road Not Taken"), T. E. Hulme, and Ezra Pound. Although Pound would become the first American to write a favorable review of Frost's work, Frost later resented Pound's attempts to manipulate his American prosody. Frost met or befriended many contemporary poets in England, especially after his first two poetry volumes were published in London in 1913 (A Boy's Will) and 1914 (North of Boston).

In 1915, during World War I, Frost returned to America, where Holt's American edition of A Boy's Will had recently been published, and bought a farm in Franconia, New Hampshire, where he launched a career of writing, teaching, and lecturing. This family homestead served as the Frosts' summer home until 1938. It is maintained today as The Frost Place, a museum and poetry conference site. He was made an honorary member of Phi Beta Kappa at Harvard in 1916. During the years 1917–20, 1923–25, and, on a more informal basis, 1926–1938, Frost taught English at Amherst College in Massachusetts, notably encouraging his students to account for the myriad sounds and intonations of the spoken English language in their writing. He called his colloquial approach to language "the sound of sense."

In 1924, he won the first of four Pulitzer Prizes for the book New Hampshire: A Poem with Notes and Grace Notes. He would win additional Pulitzers for Collected Poems in 1931, A Further Range in 1937, and A Witness Tree in 1943.

For forty-two years – from 1921 to 1962 – Frost spent almost every summer and fall teaching at the Bread Loaf School of English of Middlebury College, at its mountain campus at Ripton, Vermont. He is credited as a major influence upon the development of the school and its writing programs. The college now owns and maintains his former Ripton farmstead, a National Historic Landmark, near the Bread Loaf campus. In 1921 Frost accepted a fellowship teaching post at the University of Michigan, Ann Arbor, where he resided until 1927 when he returned to teach at Amherst. While teaching at the University of Michigan, he was awarded a lifetime appointment at the University as a Fellow in Letters. The Robert Frost Ann Arbor home was purchased by The Henry Ford Museum in Dearborn, Michigan and relocated to the museum's Greenfield Village site for public tours. Throughout the 1920s, Frost also lived in his colonial era home in Shaftsbury, VT. The home opened as the Robert Frost Stone House Museum in 2002 and was given to Bennington College in 2017.

In 1934, Frost began to spend winter months in Florida. In March 1935, he gave a talk at the University of Miami. In 1940, he bought a 5-acre (2.0 ha) plot in South Miami, Florida, naming it Pencil Pines; he spent his winters there for the rest of his life. In her memoir about Frost's time in Florida, Helen Muir writes, "Frost had called his five acres Pencil Pines because he said he had never made a penny from anything that did not involve the use of a pencil." His properties also included a house on Brewster Street in Cambridge, Massachusetts.

Harvard's 1965 alumni directory indicates Frost received an honorary degree there. Although he never graduated from college, Frost received over 40 honorary degrees, including ones from Princeton, Oxford and Cambridge universities, and was the only person to receive two honorary degrees from Dartmouth College. During his lifetime, the Robert Frost Middle School in Fairfax, Virginia, the Robert L. Frost School in Lawrence, Massachusetts, and the main library of Amherst College were named after him.

In 1960, Frost was awarded a United States Congressional Gold Medal, "In recognition of his poetry, which has enriched the culture of the United States and the philosophy of the world," which was finally bestowed by President Kennedy in March 1962. Also in 1962, he was awarded the Edward MacDowell Medal for outstanding contribution to the arts by the MacDowell Colony.

Frost was 86 when he read at the inauguration of John F. Kennedy on January 20, 1961. Frost originally attempted to read his poem "Dedication", which was written for the occasion, but was unable to read it due to the brightness of the sunlight, so he recited his poem "The Gift Outright" from memory instead.

In the summer of 1962, Frost accompanied Interior Secretary Stewart Udall on a visit to the Soviet Union in hopes of meeting Nikita Khrushchev to lobby for peaceful relations between the two Cold War powers.

Frost died in Boston on January 29, 1963 of complications from prostate surgery. He was buried at the Old Bennington Cemetery in Bennington, Vermont. His epitaph quotes the last line from his poem, "The Lesson for Today" (1942): "I had a lover's quarrel with the world."

One of the original collections of Frost materials, to which he himself contributed, is found in the Special Collections department of the Jones Library in Amherst, Massachusetts. The collection consists of approximately twelve thousand items, including original manuscript poems and letters, correspondence and photographs, as well as audio and visual recordings. The Archives and Special Collections at Amherst College holds a small collection of his papers. The University of Michigan Library holds the Robert Frost Family Collection of manuscripts, photographs, printed items, and artwork. The most significant collection of Frost's working manuscripts is held by Dartmouth.

Robert Frost's personal life was plagued by grief and loss. In 1885 when he was 11, his father died of tuberculosis, leaving the family with just eight dollars. Frost's mother died of cancer in 1900. In 1920, he had to commit his younger sister Jeanie to a mental hospital, where she died nine years later. Mental illness apparently ran in Frost's family, as both he and his mother suffered from depression, and his daughter Irma was committed to a mental hospital in 1947. Frost's wife, Elinor, also experienced bouts of depression.