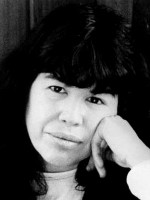 Marge Piercy was born in Detroit, Michigan to Bert (Bunnin) Piercy and Robert Piercy. While her father was non-religious from a Presbyterian background, she was raised Jewish by her mother and her Orthodox Jewish maternal grandmother, who gave Piercy the Hebrew name of Marah.

On her childhood and Jewish identity, Piercy said: “Jews and blacks were always lumped together when I grew up. I didn’t grow up ‘white.’ Jews weren't white. My first boyfriend was black. I didn't find out I was white until we spent time in Baltimore and I went to a segregated high school. I can't express how weird it was. Then I just figured they didn't know I was Jewish.”

An indifferent student in her early childhood, Piercy developed a love of books when she came down with the German measles and rheumatic fever in her mid-childhood and could do little but read. "It taught me that there's a different world there, that there were all these horizons that were quite different from what I could see".

Upon graduation from Mackenzie High School, Piercy became the first in her family to attend college, studying at the University of Michigan where she received a B.A. degree in 1957. Winning a Hopwood Award for Poetry and Fiction (1957) enabled her to finish college and spend some time in France. She earned a M.A. from Northwestern University in 1958.

After graduating college, Piercy and her first husband went to France, then returned to the United States. They divorced when Piercy was 23. Living in Chicago, she supported herself working various part time jobs while unsuccessfully trying to get her novels published. It was during this time that Piercy realized she wanted to write fiction that focused on politics, feminism, and working-class people. During her second marriage, Piercy became involved in the organization Students for a Democratic Society. In 1968, Piercy's first book of poetry, Breaking Camp, was published, and her first novel was accepted for publication that same year.