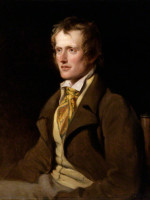 John Clare (13 July 1793 – 20 May 1864) was an English poet, the son of a farm labourer, who became known for his celebrations of the English countryside and sorrows at its disruption. His poetry underwent major re-evaluation in the late 20th century: he is now often seen as one of the important 19th-century poets. His biographer Jonathan Bate states that Clare was "the greatest labouring-class poet that England has ever produced. No one has ever written more powerfully of nature, of a rural childhood, and of the alienated and unstable self."

He became an agricultural labourer while still a child; however, he attended school in Glinton church until he was 12. In his early adult years, Clare became a potboy in the Blue Bell public house and fell in love with Mary Joyce; but her father, a prosperous farmer, forbade her to meet him. Subsequently, he was a gardener at Burghley House. He enlisted in the militia, tried camp life with Gypsies, and worked in Pickworth, Rutland as a lime burner in 1817. In the following year he was obliged to accept parish relief. Malnutrition stemming from childhood may have been the main factor behind his five-foot stature and have contributed to his poor physical health in later life.

Clare had bought a copy of James Thomson's The Seasons and began to write poems and sonnets. In an attempt to hold off his parents' eviction from their home, Clare offered his poems to a local bookseller named Edward Drury. He sent them to his cousin, John Taylor of the publishing firm of Taylor & Hessey, who had published the work of John Keats. Taylor published Clare's Poems Descriptive of Rural Life and Scenery in 1820. This book was highly praised, and the next year his Village Minstrel and Other Poems was published. "There was no limit to the applause bestowed upon Clare, unanimous in their admiration of a poetical genius coming before them in the humble garb of a farm labourer."

In 1820, he had married Martha ("Patty") Turner in Great Casterton church. An annuity of 15 guineas from the Marquess of Exeter, in whose service he had been, was supplemented by subscription, so that Clare became possessed of £45 annually, a sum far beyond what he had ever earned. Soon, however, his income became insufficient, and in 1823 he was nearly penniless. The Shepherd's Calendar (1827) met with little success, which was not increased by his hawking it himself. As he worked again in the fields his health temporarily improved; but he soon became seriously ill. Earl Fitzwilliam presented him with a new cottage and a piece of ground, but Clare could not settle in his new home.

Clare was constantly torn between the two worlds of literary London and his often illiterate neighbours; between the need to write poetry and the need for money to feed and clothe his children. His health began to suffer, and he had bouts of severe depression, which became worse after his sixth child was born in 1830 and as his poetry sold less well. In 1832, his friends and his London patrons clubbed together to move the family to a larger cottage with a smallholding in the village of Northborough, not far from Helpston. However, he only felt more alienated there.

His last work, the Rural Muse (1835), was noticed favourably by Christopher North and other reviewers, but this was not enough to support his wife and seven children. Clare's mental health began to worsen. As his alcohol consumption steadily increased along with his dissatisfaction with his own identity, Clare's behaviour became more erratic. A notable instance of this behaviour was demonstrated in his interruption of a performance of The Merchant of Venice, in which Clare verbally assaulted Shylock. He was becoming a burden to Patty and his family, and in July 1837, on the recommendation of his publishing friend, John Taylor, Clare went of his own volition (accompanied by a friend of Taylor's) to Dr Matthew Allen's private asylum High Beach near Loughton, in Epping Forest. Taylor had assured Clare that he would receive the best medical care.

Clare was reported as being "full of many strange delusions". He believed himself to be a prize fighter and that he had two wives, Patty and Mary. He started to claim he was Lord Byron.

During his first few asylum years in High Beach, Essex (1837–41), Clare re-wrote famous poems and sonnets by Lord Byron. His own version of Child Harold became a lament for past lost love, and Don Juan, A Poem became an acerbic, misogynistic, sexualised rant redolent of an ageing Regency dandy. Clare also took credit for Shakespeare's plays, claiming to be the Renaissance genius himself. "I'm John Clare now," the poet claimed to a newspaper editor, "I was Byron and Shakespeare formerly."

In 1841, Clare absconded from the asylum in Essex, to walk some 90 miles (140 km) home, believing that he was to meet his first love Mary Joyce; Clare was convinced that he was married to her and Martha as well, with children by both women. He did not believe her family when they told him she had died accidentally three years earlier in a house fire. He remained free, mostly at home in Northborough, for the five months following, but eventually Patty called the doctors in. Between Christmas and New Year in 1841, Clare was committed to the Northampton General Lunatic Asylum (now St Andrew's Hospital). Upon Clare's arrival at the asylum, the accompanying doctor, Fenwick Skrimshire, who had treated Clare since 1820, completed the admission papers. To the enquiry "Was the insanity preceded by any severe or long-continued mental emotion or exertion?", Dr Skrimshire entered: "After years of poetical prosing." He remained there for the rest of his life under the humane regime of Dr Thomas Octavius Prichard, who encouraged and helped him to write. Here he wrote possibly his most famous poem, I Am.

He died on 20 May 1864, in his 71st year. His remains were returned to Helpston for burial in St Botolph's churchyard. Today, children at the John Clare School, Helpston's primary, parade through the village and place their "midsummer cushions" around Clare's gravestone (which bears the inscriptions "To the Memory of John Clare The Northamptonshire Peasant Poet" and "A Poet is Born not Made") on his birthday, in honour of their most famous resident.