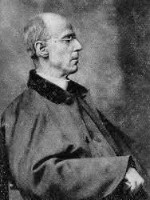 John B. Tabb was born in Amelia County, Virginia on March 22, 1845. A member of one of the state's oldest and wealthiest families, he became a blockade runner for the Confederacy during the Civil War, and spent eight months in a Union prison camp (where he formed a lifelong friendship with poet Sidney Lanier); he converted to the Roman Catholic Church in 1872, and began to teach Greek and English at Saint Charles College (Ellicott City, Maryland) in 1878.

He was ordained as a priest in 1884, after which he retained his academic position. Plagued by eye problems his whole life, he continued to teach though he lost his sight completely about a year before his death. He died at Saint Charles College on November 19, 1909.

Father Tabb (as he was commonly known) was widely published in popular and prestigious magazines of the day, including Harper's Monthly, The Atlantic Monthly, and The Cosmopolitan. His books of poetry include Poems (1894), Lyrics (1897), Later Lyrics (1902), and, posthumously, Later Poems (1910). He also wrote one prose work, Bone Rules (1897), an English grammar; only one of his sermons has survived, a sermon on the Assumption (August 15, 1894).

English poet Alice Meynell made A Selection from the Verses of John B. Tabb (1906). His biographer, Francis A. Litz, a former student of Tabb's, published previously uncollected poems and previously unpublished poems in Father Tabb: A Study of His Life and Works (1923); Litz also edited a collected edition, The Poetry of Father Tabb (1928).

The Tabb Monument in Amelia County, Virginia is dedicated to his memory.