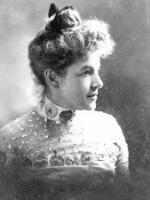 Ella Wheeler Wilcox (November 5, 1850 – October 30, 1919) was an American author and poet. Her works include Poems of Passion and Solitude, which contains the lines "Laugh, and the world laughs with you; weep, and you weep alone". Her autobiography, The Worlds and I, was published in 1918, a year before her death.

Ella Wheeler was born in 1850 on a farm in Johnstown, Wisconsin, east of Janesville, the youngest of four children. The family later moved north of Madison, after losing its wealth, as the result of her father’s failed business aspirations and speculation. Wilcox’s family held themselves to be intellectuals, and a mastery of the nuances of the English language was prized. During her childhood, Wilcox amused herself by reading books and newspapers, which may have influenced her later writing (most notably: William Shakespeare, “The Arabian Nights,” “John Gilpin’s Ride,” and “Gulliver’s Travels,” in addition to the few other pieces of literature that were to be had in her home). Around the age of 8, Wilcox turned to writing poetry as an outlet. When she was 13 years old, her first poem was published. After losing her subscription to The New York Mercury, and being unable to afford to resubscribe, Wilcox figured that if she could get a piece of literature published, she would at least receive a copy of the paper wherein her piece was printed. The piece that she submitted is lost to time, and Wilcox, herself, later admitted that she couldn’t recall even the topic. Wilcox became known as a poet in her own state by the time she graduated from high school.

Her poem, The Way of the World , was first published in the February 25, 1883 issue of The New York Sun. The inspiration for the poem came as she was travelling to attend the Governor's inaugural ball in Madison, Wisconsin. On her way to the celebration, there was a young woman dressed in black sitting across the aisle from her. The woman was crying. Miss Wheeler sat next to her and sought to comfort her for the rest of the journey. When they arrived, the poet was so depressed that she could barely attend the scheduled festivities. As she looked at her own radiant face in the mirror, she suddenly recalled the sorrowful widow. It was at that moment that she wrote the opening lines of "The Way of the World":

Laugh, and the world laughs with you;
Weep, and you weep alone.
For the sad old earth must borrow its mirth
But has trouble enough of its own

She sent the poem to the Sun and received $5 for her effort. It was collected in the book Poems of Passion shortly after in May 1883.

In 1884, she married Robert Wilcox of Meriden, Connecticut, where the couple lived before moving to New York City and then to Granite Bay in the Short Beach section of Branford, Connecticut. The two homes they built on Long Island Sound, along with several cottages, became known as Bungalow Court, and they would hold gatherings there of literary and artistic friends. They had one child, a son, who died shortly after birth. Not long after their marriage, they both became interested in theosophy, new thought, and spiritualism.

Early in their married life, Robert and Ella Wheeler Wilcox promised each other that whoever went first through death would return and communicate with the other. Robert Wilcox died in 1916, after over thirty years of marriage. She was overcome with grief, which became ever more intense as week after week went without any message from him. It was at this time that she went to California to see the Rosicrucian astrologer, Max Heindel, still seeking help in her sorrow, still unable to understand why she had no word from her Robert. She wrote of this meeting:

In talking with Max Heindel, the leader of the Rosicrucian Philosophy in California, he made very clear to me the effect of intense grief. Mr. Heindel assured me that I would come in touch with the spirit of my husband when I learned to control my sorrow. I replied that it seemed strange to me that an omnipotent God could not send a flash of his light into a suffering soul to bring its conviction when most needed. Did you ever stand beside a clear pool of water, asked Mr. Heindel, and see the trees and skies repeated therein? And did you ever cast a stone into that pool and see it clouded and turmoiled, so it gave no reflection? Yet the skies and trees were waiting above to be reflected when the waters grew calm. So God and your husband's spirit wait to show themselves to you when the turbulence of sorrow is quieted.

Several months later, she composed a little mantra or affirmative prayer which she said over and over "I am the living witness: The dead live: And they speak through us and to us: And I am the voice that gives this glorious truth to the suffering world: I am ready, God: I am ready, Christ: I am ready, Robert."

Wilcox made efforts to teach occult things to the world. Her works, filled with positive thinking, were popular in the New Thought Movement and by 1915 her booklet, What I Know About New Thought had a distribution of 50,000 copies, according to its publisher, Elizabeth Towne.

The following statement expresses Wilcox's unique blending of New Thought, Spiritualism, and a Theosophical belief in reincarnation: "As we think, act, and live here today, we build the structures of our homes in spirit realms after we leave earth, and we build karma for future lives, thousands of years to come, on this earth or other planets. Life will assume new dignity, and labor new interest for us, when we come to the knowledge that death is but a continuation of life and labor, in higher planes."

Her final words in her autobiography The Worlds and I: "From this mighty storehouse (of God, and the hierarchies of Spiritual Beings) we may gather wisdom and knowledge, and receive light and power, as we pass through this preparatory room of earth, which is only one of the innumerable mansions in our Father's house. Think on these things".

Several of Wilcox's poems were the basis for silent films: