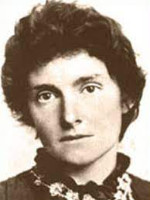 Edith Nesbit was born in 1858 at 38 Lower Kennington Lane, Kennington, Surrey (now classified as Inner London), the daughter of an agricultural chemist, John Collis Nesbit, who died in March 1862, before her fourth birthday. Her mother was Sarah Green (née Alderton).

The ill health of Edith's sister Mary meant that the family travelled for some years, living variously in Brighton, Buckinghamshire, France (Dieppe, Rouen, Paris, Tours, Poitiers, Angoulême, Bordeaux, Arcachon, Pau, Bagnères-de-Bigorre, and Dinan in Brittany), Spain and Germany. Mary was engaged in 1871 to the poet Philip Bourke Marston, but later that year she died of tuberculosis in Normandy.

After Mary's death, Edith and her mother settled for three years at Halstead Hall, Halstead, north-west Kent, a location that inspired The Railway Children, although the distinction has also been claimed by the Derbyshire town of New Mills).

When Nesbit was 17, the family moved back to Lewisham in south-east London. There is a Lewisham Council plaque to her at 28 Elswick Road.

In 1877, at the age of 18, Nesbit met the bank clerk Hubert Bland, her elder by three years. Seven months pregnant, she married Bland on 22 April 1880, but did not initially live with him, as Bland remained with his mother. Their marriage was tumultuous. Early on, Nesbit found that another woman believed she was Hubert's fiancée and had also borne him a child. A more serious blow came in 1886, when she discovered that her friend, Alice Hoatson, was pregnant by him. She had previously agreed to adopt Hoatson's child and allow Hoatson to live with her as their housekeeper. After she discovered the truth, she and her husband quarrelled violently and she suggested that Hoatson and the baby, Rosamund, should leave; her husband threatened to leave Edith if she disowned the baby and its mother. Hoatson remained with them as a housekeeper and secretary and became pregnant by Bland again 13 years later. Edith again adopted Hoatson's child, John.

Nesbit's children by Bland were Paul Cyril Bland (1880–1940), to whom The Railway Children was dedicated, Mary Iris Bland (1881–1965), who married John Austin D Phillips in 1907, and Fabian Bland (1885–1900). Bland's two children by Alice Hoatson, whom Edit adopted, were Rosamund Edith Nesbit Hamilton, later Bland (1886–1950), who married Clifford Dyer Sharp on 16 October 1909, and to whom The Book of Dragons was dedicated, and John Oliver Wentworth Bland (1899–1946) to whom The House of Arden and Five Children and It were dedicated. Nesbit's son Fabian died aged 15 after a tonsil operation; Nesbit dedicated several books to him, including The Story of the Treasure Seekers and its sequels. Nesbit's adopted daughter Rosamund collaborated with her on Cat Tales.

Nesbit admired the artist and Marxian socialist William Morris. The couple joined the founders of the Fabian Society in 1884, after which their son Fabian was named, and jointly edited its journal Today. Hoatson was its assistant secretary. Nesbit and Bland dallied with the Social Democratic Federation, but found it too radical. Nesbit was a prolific lecturer and writer on socialism in the 1880s. She and her husband co-wrote under the pseudonym "Fabian Bland", However, the joint work dwindled as her success rose as a children's author. She was a guest speaker at the London School of Economics, which had been founded by other Fabian Society members.

Edith lived from 1899 to 1920 at Well Hall, Eltham, in south-east London, which makes fictional appearances in several of her books, such as The Red House. From 1911 she kept a second home on the Sussex Downs at Crowlink, Friston, East Sussex. She and her husband entertained many friends, colleagues and admirers at Well Hall.

On 20 February 1917, some three years after Bland died, Nesbit married Thomas "the Skipper" Tucker in Woolwich, where he was captain of the Woolwich Ferry.

Towards the end of her life, Nesbit moved first to Crowlink, then to "The Long Boat" at Jesson, St Mary's Bay, New Romney, Kent, where probably suffering from lung cancer (she "smoked incessantly"), she died in 1924 and was buried in the churchyard of St Mary in the Marsh. Her husband Thomas died at the same address on 17 May 1935. Edith's son Paul Bland was an executor of Thomas Tucker's will.