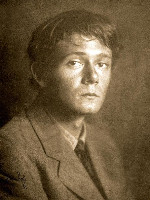 Clark Ashton Smith was born January 13, 1893, in Long Valley, California, into a family of English and New England heritage. He spent most of his life in the small town of Auburn, California, living in a cabin built by his parents, Fanny and Timeus Smith. Smith professed to hate the town's provincialism but rarely left it until he married late in life.

His formal education was limited: he suffered from psychological disorders including intense agoraphobia, and although he was accepted to high school after attending eight years of grammar school, his parents decided it was better for him to be taught at home. An insatiable reader with an extraordinary eidetic memory, Smith appeared to retain most or all of whatever he read. After leaving formal education, he embarked upon a self-directed course of literature, including Robinson Crusoe, Gulliver's Travels, the fairy tales of Hans Christian Andersen and Madame d'Aulnoy, the Arabian Nights and the poems of Edgar Allan Poe. He read the entire unabridged 13th edition of Webster's Dictionary word for word, studying not only the definitions of the words but also their etymology.

The other main course in Smith's self-education was to read the complete 11th edition of the Encyclopædia Britannica at least twice. Smith later taught himself French and Spanish to translate verse out of those languages, including works by Gérard de Nerval, Paul Verlaine, Amado Nervo, Gustavo Adolfo Bécquer and all but 6 of Charles Baudelaire's 157 poems in The Flowers of Evil.

His first literary efforts, at the age of 11, took the form of fairy tales and imitations of the Arabian Nights. Later, he wrote long adventure novels dealing with Oriental life. By 14 he had already written a short adventure novel called The Black Diamonds which was lost for years until published in 2002. Another juvenile novel was written in his teenaged years: The Sword of Zagan (unpublished until 2004). Like The Black Diamonds, it uses a medieval, Arabian Nights-like setting, and the Arabian Nights, like the fairy tales of the Brothers Grimm and the works of Edgar Allan Poe, are known to have strongly influenced Smith's early writing, as did William Beckford's Vathek.

At age 17, he sold several tales to The Black Cat, a magazine which specialized in unusual tales. He also published some tales in the Overland Monthly in this brief foray into fiction which preceded his poetic career.

However, it was primarily poetry that motivated the young Smith and he confined his efforts to poetry for more than a decade. In his later youth, Smith made the acquaintance of the San Francisco poet George Sterling through a member of the local Auburn Monday Night Club, where he read several of his poems with considerable success. On a month-long visit to Sterling in Carmel, California, Smith was introduced by Sterling to the poetry of Baudelaire.

He became Sterling's protégé and Sterling helped him to publish his first volume of poems, The Star-Treader and Other Poems, at the age of 19. Smith received international acclaim for the collection. The Star-Treader was received very favorably by American critics, one of whom named Smith "the Keats of the Pacific". Smith briefly moved among the circle that included Ambrose Bierce and Jack London, but his early fame soon faded away.

A little later, Smith's health broke down and for eight years his literary production was intermittent, though he produced his best poetry during this period. A small volume, Odes and Sonnets, was brought out in 1918. Smith came into contact with literary figures who would later form part of H.P. Lovecraft's circle of correspondents; Smith knew them far earlier than Lovecraft. These figures include poet Samuel Loveman and bookman George Kirk. It was Smith who in fact later introduced Donald Wandrei to Lovecraft. For this reason, it has been suggested that Lovecraft might as well be referred to as a member of a "Smith" circle as Smith was a member of a Lovecraft one.

In 1920 Smith composed a celebrated long poem in blank verse, The Hashish Eater, or The Apocalypse of Evil which was published in Ebony and Crystal (1922). This was followed by a fan letter from H. P. Lovecraft, which was the beginning of 15 years of friendship and correspondence. With studied playfulness, Smith and Lovecraft borrowed each other's coinages of place names and the names of strange gods for their stories, though so different is Smith's treatment of the Lovecraft theme that it has been dubbed the "Clark Ashton Smythos."

In 1925 Smith published Sandalwood, which was partly funded by a gift of $50 from Donald Wandrei. He wrote little fiction in this period with the exception of some imaginative vignettes or prose poems. Smith was poor for most of his life and often did hard manual jobs such as fruit picking and woodcutting to support himself and his parents. He was an able cook and made many kinds of wine. He also did well digging, typing and journalism, as well as contributing a column to The Auburn Journal and sometimes worked as its night editor.

At the beginning of the Depression in 1929, with his aged parents' health weakening, Smith resumed fiction writing and turned out more than a hundred short stories between 1929 and 1934, nearly all of which can be classed as weird horror or science fiction. Like Lovecraft, he drew upon the nightmares that had plagued him during youthful spells of sickness. Brian Stableford has written that the stories written during this brief phase of hectic productivity "constitute one of the most remarkable oeuvres in imaginative literature".

He published at his own expense a volume containing six of his best stories, The Double Shadow and Other Fantasies, in an edition of 1000 copies printed by the Auburn Journal. The theme of much of his work is egotism and its supernatural punishment; his weird fiction is generally macabre in subject matter, gloatingly preoccupied with images of death, decay and abnormality.

Most of Smith's weird fiction falls into four series set variously in Hyperborea, Poseidonis, Averoigne and Zothique. Hyperborea, which is a lost continent of the Miocene period, and Poseidonis, which is a remnant of Atlantis, are much the same, with a magical culture characterized by bizarreness, cruelty, death and postmortem horrors. Averoigne is Smith's version of pre-modern France, comparable to James Branch Cabell's Poictesme. Zothique exists millions of years in the future. It is "the last continent of earth, when the sun is dim and tarnished". These tales have been compared to the Dying Earth sequence of Jack Vance.

In 1933 Smith began corresponding with Robert E. Howard, the Texan creator of Conan the Barbarian. From 1933 to 1936, Smith, Howard and Lovecraft were the leaders of the Weird Tales school of fiction and corresponded frequently, although they never met. The writer of oriental fantasies E. Hoffmann Price is the only man known to have met all three in the flesh.

Critic Steve Behrends has suggested that the frequent theme of 'loss' in Smith's fiction (many of his characters attempt to recapture a long-vanished youth, early love, or picturesque past) may reflect Smith's own feeling that his career had suffered a "fall from grace":

Smith's late teens and early twenties had certainly been a heady period: he'd been taken under the wing of a personal idol, the poet George Sterling, and his first book of poetry had brought him comparisons to Keats and Shelley. This notoriety must surely have raised his standing in his small hometown. And yet the depression found Smith without a job or viable occupation, unable to eke out a living as a poet, with girlfriends berating him for his lack of ambition. And while his turn to writing fiction did put bread on the table, he found it a very distasteful business at times—he had once said to Sterling that writing prose was "a hateful task, for a poet, and [one which] wouldn't be necessary in any true civilisation." In short, it may be that Smith experienced that variety of "let-down" or loss peculiar to the child prodigies.

In September 1935, Smith's mother Fanny died. Smith spent the next two years nursing his father through his last illness. Timeus died in December 1937. Aged 44, Smith now virtually ceased writing fiction. He had been severely affected by several tragedies occurring in a short period of time: Robert E. Howard's death by suicide (1936), Lovecraft's death from cancer (1937) and the deaths of his parents, which left him exhausted. As a result, he withdrew from the scene, marking the end of Weird Tales' Golden Age. He began sculpting and resumed the writing of poetry. However, Smith was visited by many writers at his cabin, including Fritz Leiber, Rah Hoffman, Francis T. Laney and others.

In 1942, three years after August Derleth founded Arkham House for the purpose of preserving the work of H.P. Lovecraft, Derleth published the first of several major collections of Smith's fiction, Out of Space and Time (1942). This was followed by Lost Worlds (1944). The books sold slowly, went out of print and became costly rarities. Derleth published five more volumes of Smith's prose and two of his verse, and at his death in 1971 had a large volume of Smith's poems in press.

In 1953, Smith suffered a coronary attack. Aged 61, he married Carol(yn) Jones Dorman on November 10, 1954. Dorman had much experience in Hollywood and radio public relations. After honeymooning at the Smith cabin, they moved to Pacific Grove, California, where he set up a household including her three children. (Carol had been married before). For several years he alternated between the house on Indian Ridge and their house in Pacific Grove. Smith having sold most of his father's tract, in 1957 the old house burned – the Smiths believed by arson, others said by accident.

Smith now reluctantly did gardening for other residents at Pacific Grove, and grew a goatee. He spent much time shopping and walking near the seafront but despite Derleth's badgering, resisted the writing of more fiction. In 1961 he suffered a series of strokes and in August 1961 he quietly died in his sleep, aged 68. After Smith's death, Carol remarried (becoming Carolyn Wakefield) and subsequently died of cancer.

The poet's ashes were buried beside, or beneath, a boulder to the immediate west of where his childhood home (destroyed by fire in 1957) stood; some were also scattered in a stand of blue oaks near the boulder. There was no marker. Plaques recognizing Smith have been erected at the Auburn Placer County Library in 1985 and in Bicentennial Park in Auburn in 2003.

Smith's literary estate is represented by his stepson, Prof William Dorman, director of CASiana Literary Enterprises. Arkham House owns the copyright to many Smith stories, though some are now in the public domain.

For 'posthumous collaborations' of Smith (stories completed by Lin Carter), see the entry on Lin Carter.