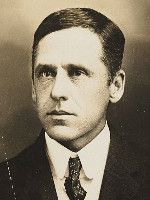 Andrew Barton "Banjo" Paterson (17 February 1864 – 5 February 1941) was an Australian bush poet, journalist and author. He wrote many ballads and poems about Australian life, focusing particularly on the rural and outback areas, including the district around Binalong, New South Wales, where he spent much of his childhood. Paterson's more notable poems include "Clancy of the Overflow" (1889), "The Man from Snowy River" (1890) and "Waltzing Matilda" (1895), regarded widely as Australia's unofficial national anthem.

Andrew Barton Paterson was born at the property "Narrambla", near Orange, New South Wales, the eldest son of Andrew Bogle Paterson, a Scottish immigrant from Lanarkshire, and Australian-born Rose Isabella Barton, related to the future first Prime Minister of Australia Edmund Barton. Paterson's family lived on the isolated Buckinbah Station near Yeoval NSW until he was five when his father lost his wool clip in a flood and was forced to sell up. When Paterson's uncle John Paterson died, his family took over John Paterson's farm in Illalong, near Yass, close to the main route between Melbourne and Sydney. Bullock teams, Cobb and Co coaches and drovers were familiar sights to him. He also saw horsemen from the Murrumbidgee River area and Snowy Mountains country take part in picnic races and polo matches, which led to his fondness of horses and inspired his writings.

Paterson's early education came from a governess, but when he was able to ride a pony, he was taught at the bush school at Binalong. In 1874 Paterson was sent to Sydney Grammar School, performing well both as a student and a sportsman. During this time, he lived in a cottage called Rockend, in the suburb of Gladesville. The cottage is now listed on the Register of the National Estate and New South Wales State Heritage Register. He left the prestigious school at 16 after failing an examination for a scholarship to University of Sydney.

Paterson was a law clerk with a Sydney-based firm headed by Herbert Salwey, and was admitted as a solicitor in 1886. In the years he practised as a solicitor, he also started writing. From 1885, he began submitting and having poetry published in The Bulletin, a literary journal with a nationalist focus. His earliest work was a poem criticising the British war in the Sudan, which also had Australian participation. Over the next decade, the influential journal provided an important platform for Paterson's work, which appeared under the pseudonym of "The Banjo", the name of his favourite horse. As one of its most popular writers through the 1890s, he formed friendships with other significant writers in Australian literature, such as E.J. Brady, Harry "Breaker" Morant, Will H. Ogilvie, and Henry Lawson. In particular, Paterson became engaged in a friendly rivalry of verse with Lawson about the allure of bush life.

Just as he returned to Australia, the third collection of his poetry, Saltbush Bill JP, was published and he continued to publish verse, short stories and essays while continuing to write for the weekly Truth. Paterson also wrote on rugby league football in the 1920s for the Sydney Sportsman.

The publication of The Man from Snowy River and five other ballads in The Bulletin made "The Banjo" a household name. In 1895, Angus & Robertson published these poems as a collection of Australian verse. The book sold 5000 copies in the first four months of publication.

In 1895, Paterson headed north to Dagworth station near Winton, Queensland. Travelling with fiancée, Sarah Riley, they met with her old school friend, Christina Macpherson, who had recently attended a race at Warrnambool in Victoria. She had heard a band playing a tune there, which became stuck in her head and replayed it for Paterson on the autoharp. The melody also resonated with him and propelled him to write "Waltzing Matilda" While there has been much debate about what inspired the words, the song became one of his most widely known and sung ballads.

In addition, he wrote the lyrics for songs with piano scores, such as "The Daylight is Dying" and Last Week. These were also published by Angus & Robertson between the years 1895 to 1899. In 1905, the same publishers released Old Bush Songs, a collection of bush ballads Paterson had been assembling since 1895.

Although for most of his adult life, Paterson lived and worked in Sydney, his poems mostly presented a highly romantic view of the bush and the iconic figure of the bushman. Influenced by the work of another Australian poet, John Farrell, his representation of the bushman as a tough, independent and heroic underdog became the ideal qualities underpinning the national character. His work is often compared to the prose of Henry Lawson, particularly the seminal work, "The Drover's Wife", which presented a considerably less romantic view of the harshness of rural existence of the late 19th century.

Paterson authored two novels; An Outback Marriage (1906) and The Shearer's Colt (1936), wrote many short stories; Three Elephant Power and Other Stories (1917), and wrote a book based on his experiences as a war reporter, Happy Dispatches (1934). He also wrote a book for children, The Animals Noah Forgot (1933)

Contemporary recordings of many of Paterson's well known poems have been released by Jack Thompson, who played Clancy in the 1982 film adaptation of "The Man from Snowy River". While having no connection to the movie, an Australian television series of the same name was broadcast in the 1990s.